“There Wasn’t Much More Than a Flicker of Hope Until I Called Hamilton Wingo and Spoke with Paul.” 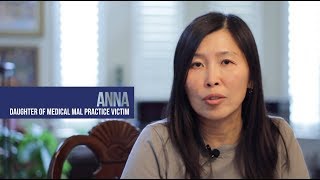 Anna shares the story of what happened to her mother when the negligence of someone else caused long-lasting consequences and how Hamilton Wingo got her the compensation she deserved.

“So this happened, I don’t know, I think this is the third year now, when my mom, my mom went for a hip replacement surgery, and she was doing well, the surgery went well, and then the next morning I even went to therapy with her, left her to go to lunch, and then I get a call from the hospital and was told that her thigh was broken. The bones in her thigh were broken. Which, I was a little puzzled and, and very concerned at that time,  and then after I had a chance to talk to my mom, she said that somebody actually was trying to lift her onto X-ray bed and the guy kneed her in the thigh after she just had surgery the day before.

So that’s what happened, and she said that she heard a pop. She knew something was wrong because she was in great pain. After the incident, they took her to the bed and they didn’t claim any responsibility. They thought she had fallen – which wasn’t the case.

She was very adamant – and my mom, even though in her 80’s – she’s very coherent. She’s very sharp. She still works out for over an hour or two each day. I knew there was something wrong with that.

They were very apologetic but then a week later after everything settled they denied responsibility.

I even talked to the legal department which they told us that they were going to do a complete investigation. That happened in the next several weeks. They came back and said that they followed procedures, nothing went wrong,  that the guy did not touch her – which was a complete lie.

So at that time, I was very,  frustrated and furious. My mom was very frustrated because the whole point of her going in for hip replacement surgery was so that she could walk better without pain.

This was really was a big setback for her, just because she’s already in her 80s, and it impacted her even greater just because of her age. She’s out of time, and she’s wanting to travel, and that’s the reason why she went in for surgery in the first place. I was, you know, opening up the Yellow Pages and googling just law firms that would even look at my mom’s case.

I called several other firms and I explained the situation. They all said that because of her age that her bones were brittle so it was going to be a very hard case to win, to prove and to win because there wasn’t any witness other than my mom and the lady who wheeled her in and the technician.

They asked me to go into the office. I didn’t.  I was a little hesitant because I didn’t want to- I mean, I, I have a full-time job, so I didn’t have a lot of time and there wasn’t much than a flicker of hope until I called Hamilton Wingo and spoke with Paul.

He was very empathetic to the situation. I mean, he, he told me pretty much the same thing, but instead of, like, “Oh, just come in and we’ll talk,” he actually was, you know,  said that he would even drive out and meet with my mom and myself. He was going to call another expert to see what we can do about her situation.  Just having somebody to listen and understand and show empathy was a big thing.

And then, of course, that took a while, so we did proceed with him and we signed all necessary paperwork and it took a long time because the – unfortunately, the hospital is in Denton County. Which we were told the court isn’t very good. They usually side with the hospital.

Paul had worked really hard trying to get the case moved back to Dallas County. That took several months, and finally, I think he found a way to raise the lawsuit because the president of the hospital resides in Dallas, so that’s kind of how we started with that. Then over the, the last, I mean, it took several years, but I think during that time he kept us informed of progress and making sure that we will still have a case. We kind of lost hope because time has progressed and my mom’s getting, you know, worse and worse. She had to go through a lot of therapy. She’s really frustrated with the whole process and how it turned out to be a nightmare.

Paul kept us pretty much up to date on progress The whole process, even though I wouldn’t say that I want to repeat it again,  that it was,  it, I mean, we actually, you know, now that we won and, and she, they settled for, for the a-and compensated her for even though it wasn’t enough because of the state cap, but, but it still, you know, justice is served.

My mom’s happier. She’s, you know, put that behind her. She’s, she’s getting better. So now this settlement check is going to really help her in her old age. Because she’s already in her mid-80s and doesn’t have a lot of time. So now she gets to do some of the things that she had, you know, originally planned to do.

So thank you,  a lot to all the entire staff at Hamilton Wango and especially Paul for helping us with this lawsuit that we would never have gotten anything or gotten anywhere with the hospital on our own.”